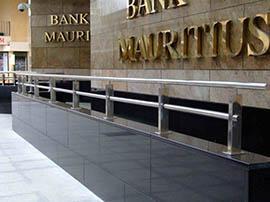 Functions and Responsibilities of the Bank

The functions of the Bank are directed towards the achievement of its mandate. In particular, the Bank is entrusted with the responsibilities to:

The Banking Act 2004 is the enabling legislation for all financial institutions falling under the purview of the Bank of Mauritius. The basic objectives behind the Banking Act 2004 are to maintain a sound banking system in Mauritius and protect the interests of depositors and creditors.

The Banking Act 2004 as amended enables the Bank to issue licences to banks wishing to carry on any of the following: banking business, Islamic banking business and private banking. Since May 2015, the Bank can also issue a specialised financial institution licence to a body corporate which has been set up for the purposes of facilitating the economic development of Mauritius.

The Banking Act 2004 incorporates the following aspects relating to financial institutions falling under the ambit of the Bank of Mauritius:

The Bank participates actively in regional fora to foster, inter alia, regulatory and supervisory cooperation and financial stability in Africa. Among others, the Bank is involved at the level of:

The Bank acts as the settlement bank for the Regional Payment and Settlement System (REPSS) of the COMESA.