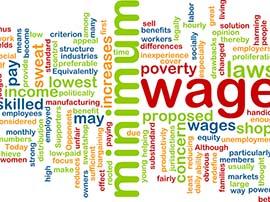 Legal minimum wage rates vary according to job category and years of service, and are fixed periodically by the National Remuneration Orders for the various sectors. Average wages paid in practice tend to be substantially higher than these legal minimums, especially in the EPZ and construction sectors. Before the Budget Speech' each year, the unions take part in tripartite negotiations with the Government and the Mauritius Employers Federations (MEF), to decide upon a cost of living adjustment to wage rates at national level.

Generally one single percentage figure for the annual cost of living increase is decreed by the Government for the whole country and all employers are legally bound to apply this percentage figure to the pay rates of their employees whether they are members of unions or not. This agreed rate is given the force of law through an additional remuneration act.

The annual tripartite among state/employer/employee negotiation is however not the only type of pay rate negotiation. Unions are not prohibited from negotiating at factory or industry level. However, in practice this would be more for productivity increases than for the cost of living adjustment.

Minimum overtime rates are fixed by law ranging from 150% to 300% of basic rates. Employees in continuous employment with the same company for one year are entitled to an annual bonus equivalent to one twelfth of their earnings for the year. Productivity bonuses are also paid at the employer’s discretion.