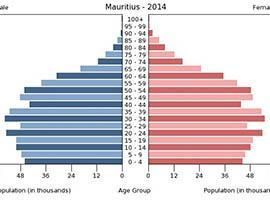 The population is estimated to be around 1,265,138 as at the end of December 2017. It forms a unique mosaic of different races, cultures and religions since Mauritians are descendants of immigrants from the Indian subcontinent, Africa, Europe and China. The cultural diversity and harmony of the island make Mauritius a unique place in the world. Most Mauritians are bilingual, being equally fluent in French and English. English is the official language of Parliament, but French and Creole are widely spoken while a number of oriental languages such as Hindi and Mandarin also form part of the linguistic blend.